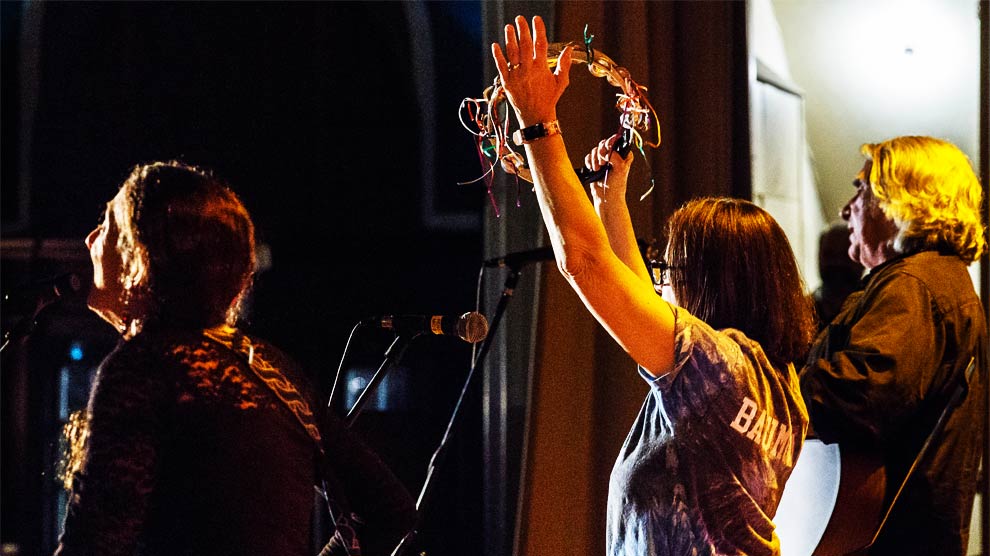 The Campfire Flies are:

This group is a songwriter’s dream sextet, bringing together some of New Jersey’s most acclaimed indie rock writers and performers: John and Toni Baumgartner and Ed Seifert (Speed The Plough), Deena Shoshkes and Jon Fried (The Cucumbers) and Matthew Davis (The Thousand Pities).

“Our first rehearsal was by candlelight in John and Toni’s living room,” recalls Fried. Longtime friends and admirers of each others’ work, the band formed one stormy night. A ferocious storm felled trees and knocked out the power in Haledon, NJ, the evening the group had set aside to play through each other’s songs for fun. “There was a glowing, warm magic to the mood and the acoustic sounds, and we all couldn’t wait to get together and do it again,” says Davis.

Each songwriter comes to the group with a long rich history and collection of songs. Each had songs that never quite fit into their existing bands, or saw their way into the world in just the right fashion. All of The Campfire Flies are multi-instrumentalists, (John B. – accordion, keys, Ed – guitar,mandolin, harmonica, Toni – winds, percussion, Matt – guitar, bass, Jon – banjo, bass, guitar, Deena – guitar, bass, percussion) and everyone sings. Key to the band’s sound are layered harmonies and four distinct, well- loved songwriting voices, enabling the band to create a broad spectrum of acoustic textures.

The new album SPARKS LIKE LITTLE STARS – out now!

After a year of performing at clubs and festivals in New York and New Jersey the group decided to record an album. “New songs keep bubbling up among us, and we felt we needed to document what we had,” says Shoshkes. The Campfire Flies’ debut album Sparks Like Little Stars was released on March 22, 2019 by OverPop Music. The eleven songs on the album were produced by the band. Tracks were engineered by Rob Friedman (Dan Zanes, Jackson Browne, Lou Reed) at David Cossin’s (Bang on a Can) studio, mixed by Don Sternecker (The Feelies, Railroad Earth) at Mix-o-lydian Studios, and mastered by Scott Anthony at Storybook Sound.

The album’s opening track, “If Your Eyes Are Closed,” is one that Ed and Deena performed together prior to the Campfire Flies’ formation – so it was a natural fit for the band. The Flies’ arrangement, with Toni’s flute and Ed’s mandolin, brings the Buddy Holly-esque composition more towards Fairport Convention territory.

“Go Back To Your Heart” was written by Deena just months before the band was formed. As soon as Ed heard Deena’s demo, he said “You should have John Baumgartner play accordion on this!” Toni’s clarinet adds to the song’s continental flair. Jon and Ed accompany Deena on vocals.

John’s “Deep Water” shows off the Campfire Flies’ layered harmonies perhaps better than any song in their repertoire. A deceptively simple chord structure, driven by John’s piano, builds and ebbs and builds again on the strength of four-part harmony background vocals by Jon, Matt, Deena, and Toni.

Matt’s haunting and ethereal “Blue Fall Day” has sonic textures unlike anything else on the album, enhanced by John’s bubbling keyboards and Toni’s moody dual recorder solos. When the chorus arrives, the lush vocal arrangement makes for an unmistakable Campfire Flies song.

Find us on social media, etc.